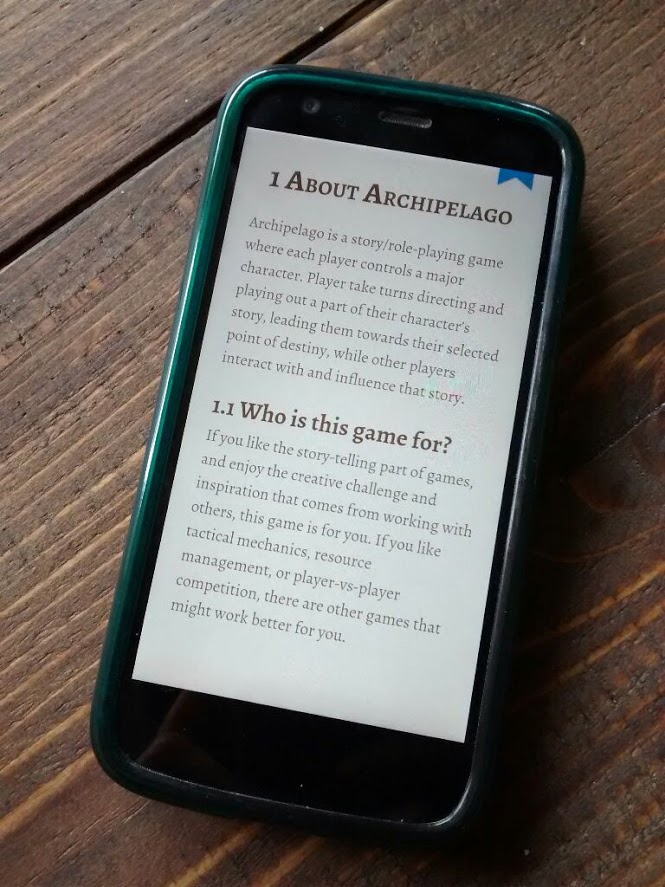 Update: As of September 7th 2016, both Epub and Mobi files are now illustrated - I added all the pictures from the PDF., which I had previously left out for lack of Epub expertise. Redownload from the links below to get the new versions!

Archipelago III is a GM-less collaborative storygame by Matthijs Holter and Jason Morningstar. Until now, it was only available in PDF form. I wanted to read it in bed, so I reformatted it into a nice ePub file you can put on your Nook (do people still use those?) or whatever other device you’re using to read stuff on the go or in bed.

The file also works well on your phone (Android or iPhone) if uploaded to Google Books (or other epub apps) or iBooks.

-> Download Archipelago III in ePub format for your ereader or smartphone! (Note: Updated on Friday, May 20th 2016 - had missed a couple of missing letters due to ligatures)

-> Kindle (mobi) Version of Archipelago III
Pretty much untested, since I don’t own a Kindle and Amazon refuses to make a Mac compatible conversion/preview app; but my preview in Calibre seemed to look okay.

I’m using it on a German 6” Tolino Shine eInk reader, where it looks pretty good. If you notice any errors (there may be some more ligatures I missed adding back in after copying from the pdf) or formatting problems on your device, get in touch and I can try to fix them.

Edit: I’ve added a mobi version for the Kindle, but could not test it properly. Please tell me in the comments about anything that’s broken.